Ra-Syn is a French speaker rapper, German singer-songwriter from Cameroon. He founded the rap group U.M.A.R. C.V.M with his friends in Yaoundé in 1992. In 2001, Ra-Syn is recognized as a leading artist of the Cameroonian Hip-Hop scene with the album “Born Under a Tree” broadcast on all radios of the country. Also, the album achieves “Album of the Week” on Radio France International with Claudy Siar and awarded the best rap album in Cameroon.

Undeniably, Ra-Syn becomes a figurehead of Cameroonian and African Hip-Hop. He has performed on several international festival stages including over 800 concerts in Africa, France, and Germany. Ra-Syn can be seen in several films like Itilga, “The Destinies”, a short film produced by Waza Images and signed by the director Osvalde Halade Lewat. In 2002, the film broadcasts on TV5 in all the French-speaking countries of the world.

In 2003, Ra-Syn left Cameroon and moved to Amiens in France where he founded the independent label “AmFMusic Unltd.” In 2007, he self-produced the 6 track EP “African Mic Fighter.” In 2009, the sophomore album “Noble and Just Cause” with more than thirty artists including Joël Teek, Melinda Neal, OneR P, Mikah Ali, TNT, VOC Beatboxer, DJ JAWZ, Black Crom, Fulaw, SPR. The music of Ra-Syn is an invitation to the meeting of different universes.

On April 24, 2020, Ra-Syn releases his latest single “La Mer” on digital music platforms. The single was born when his friend and colleague Eric Vincenzini went on vacation to the Côte d’Azur in France in 2016. Eric said that he couldn’t get the melody of “La Mer” (Charles Trenet) out of his head.  During a joint exploratory expedition in Senegal, they were able to delve deep into the country’s cultural scene. In this environment, the creative process was initiated to make “La Mer” into a version of its own and to draw attention to the catastrophic conditions that continue to this day. 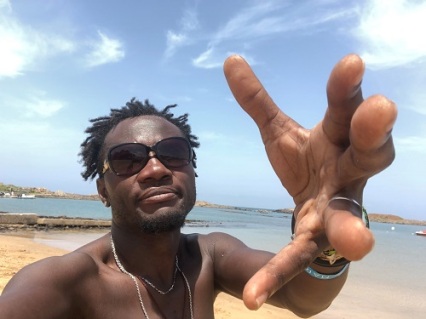 “It was important to me not to stand here with a raised forefinger, but simply to tell a story that emphasizes the motives. Poverty and dreams of people who see no way out and leave their homes, no matter what it costs.”

A network of Ra-Syn’s friends were enthusiastic about this idea, including the experienced producer and rapper “Krotal (Paul Edouard Etoundi Onambélé)” from Cameroon. Krotal has worked with Manu Dibango, Didier Awadi, Kelly Rowland, Pit Baccardi, and many other African artists, as well as Bobo Brunel Artyst B., who has become an integral part of the Parisian party scene. Both exceptional artists contributed the beats for the newly-created project in their unique way.

The versions of the song were recorded in the Cologne studio Golden Factory(Aras Yadegari ) where the gifted jazz trumpeter Karz von Bonin and Stefan Plassmann (backing vocals) added the finishing touches. Be sure to connect with Ra-Syn on his website, all social media, and digital music platforms.