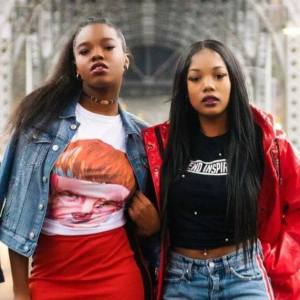 It takes endless amounts of creativity and experimentation before chemistry builds and Majix (pronounced magic) is created! With the release of their new single “Lethal,” R&B/Hip-Hop duo Majix is breaking boundaries in the male-dominated world of hip-hop. Taylor Nirvana Jones and Mea Wilkerson exude the requisite hustle, independence, and in-your-face confidence that comes from grinding in the New York City music scene. The duo is now based in Los Angeles.

“Lethal”, an island/afrobeat infused sound was written by Mrose for VH1’s reality series “Signed”. The feeling is sexy, urgent, and in your face. Majix’s previously released single “Regular” reached the leaderboard of New York’s Hot 97 radio “Who’s Next.”

These ladies are no strangers to the business. Taylor and Mea are also celebrating a milestone, being a part of the cast of the Netflix series “Brainchild,” executive produced by Pharrell Williams. “It was such an honor to be part of the series,” says Mea. Taylor goes on to say the experience allowed them to flex their acting muscles and opened the door for new opportunities. Taylor was also part of the MTV’s VMAs commercial, which featured recording artist Lauv and several other national commercials. Majix’s unique abilities confirm that they are not “Regular” and their impact won’t be either. Be sure to connect with them on social media and digital music platforms.