Midwest Collective, Half Moon Science releases their latest project, “A Loaf of Bread, a Container of Milk & a Stick of Butter”

Half Moon Science is a beat-making collective hailing from Chicago and Milwaukee that decided to join forces to put out an instrumental album called “A Loaf of Bread, A Container of Milk, & A stick of Butter”. The members -Therapy Beats, Noble Dru & Wendell Scott- are not new to the game and have many albums under their belts. Therapy Beats and Noble Dru were previously in a three-man rap group called Beatmonstas. Shortly after a group member left- the two decided to reinvent themselves as Beat Makers- later forming– Half Moon Science with Wendell Scott. 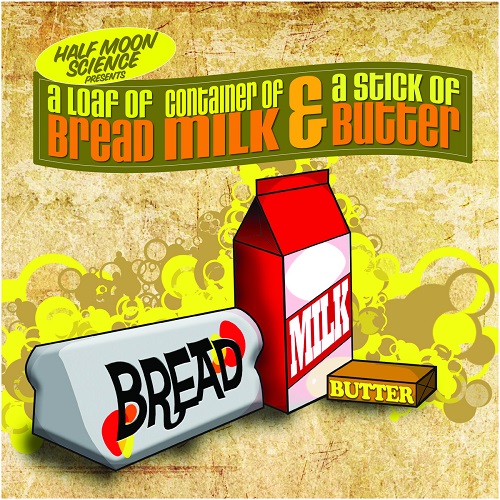 Therapy Beats has worked with DJ 3rd Rail, Aztec Dinero, and a host of others. Additionally, Wendell Scott has lent his production skills on some Beatmonstas releases as well as provided production for a wide range of artists in the Milwaukee area. The crew members make most of their music using equipment such as; Akai MPCs, Synthesizers, Samples and Records. All of their records are produced in house and mixed and mastered by Noble Dru to keep the sonic integrity of their sound. Currently, the Half Moon Science team has been performing their live beat sets throughout the Midwest (USA) and is ready to expand nationwide and internationally.

Their debut album – A Loaf of Bread, a Container of Milk & a Stick of Butter- was released Sept 6th, 2019 on Cassette Tape in limited supply and available as a digital release that can be purchased on Bandcamp or streamed on all major platforms. The album features guest vocalists -D.J. Rob-Ski, Sense One, Rafiqi Green – and scratches from DJ 3rd Rail. There is a high demand for the vinyl and cd formats and will be available soon. Half Moon Science is here to maintain the purity of Hip Hop and keep the tradition of Boom Bap production alive.